The Fourth of July Russian Style!

Holidays while you are abroad are difficult since usually it is business as usual in your host country and so you continue on with your life like it is any other day. Today to celebrate the fourth in Russia we had a two hour mid-term exam. Not a fun way to start off the day but the test wasn't too bad and it meant we could relax the rest of the day. After that we went to Gorky Park, a large park near the center of the town to have shashlik (like shish kababs from the Caucasus and incidentally one of my favorite things to eat) and celebrate our Independence Day. I prepared some traditional folk songs and we sang our national anthem. Then after dinner we just hung out in the park. This is a picture of the Soviet Memorial at the entrance to the park. 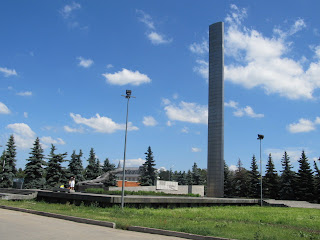 This is a picture of the Americans and some of our Russian tutors hanging out in the park. We even had music to sing and dance to! 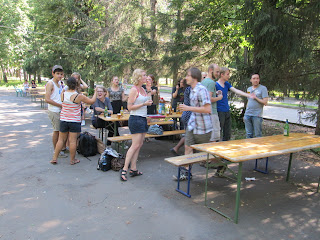 At the end of the day we went to try and see if this Georgian restaurant that was not too far from the park was open. Since the fall of the Soviet Union there are many Georgians who remained in Russia and so restaurants have popped up in the Post-Soviet to cater to the demand of this delicious cuisine and wine. The wine is actually not available in Russia since the 2008 war with Georgia because Russia placed an embargo on it but I was able to try it in the US. We ate Georgian a bunch when I was in St Petersburg two years ago and I wanted to eat as much as I could on this trip to Russia because it is so delicious. Since we arrived in Kazan we have been trying to find a restaurant and they either didn't exist or were closed when we went there. However on the Fourth of July, victory was finally mine and it came in the form of a dish called khachapuri (a bread topped with goat cheese)! It is so wonderful that I had to take a picture of myself with it to capture the moment. 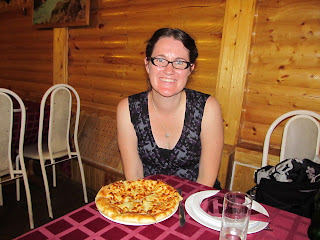 Here is another close up of the khachapuri! A great way to end our celebration of the Fourth of July! 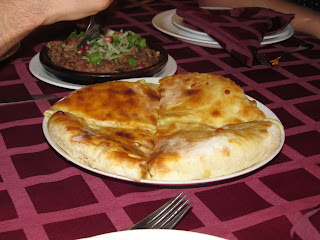