Over the past few weeks I have been working on developing a protocol for Commercial Sexual Exploitation of Children/Domestic Minor Sex Trafficking Protocol for Clayton County the county where I live and work in Georgia. I was approached to write this protocol by the head of the Clayton County Child Exploitation Prevention & Response Multi-Disciplinary Team because of my research on human trafficking laws. I happily accepted the challenge and thought it would be interesting to apply everything I have learned from the hundreds of human trafficking policies that I have read over the years and use that to formulate a policy for my county. 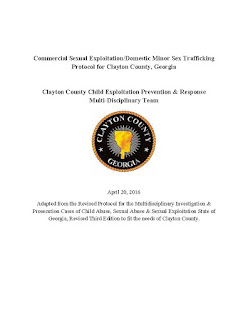 I began utilizing protocol examples of the state level Protocol for the Multidisciplinary  Investigation & Prosecution Cases of Child Abuse, Sexual Abuse & Sexual Exploitation and Georgia’s Division of Family and Children Services’ (DFCS) Commercial Sexual Exploitation/Domestic Minor Sex Trafficking Case Management Protocol. I found that the first documents dealt mostly with child abuse cases and it felt as if human trafficking was tacked on. Also both of these documents were really geared toward DFCS and not the law enforcement or any type of prosecution procedures which is what we were looking for at the county level. I took the necessary language for the DFCS section of the protocol and the rest will have to be completely reworked. I also removed some of the gendered language from the protocol that I have written about in my academic work and can perpetuate stereotypes about female victims (victims can be male and female) and promote an idealized image of worthy and unworthy victims. I also removed some of the street terminology which I felt was unnecessary in a government protocol and also perpetuated racial and gendered stereotypes.

We wanted to add sections to the protocol on the procedures for police investigation of CSEC, joint investigations between law enforcement and DFCS, prosecution procedures for CSEC cases, medical personnel response, and educational programs. I started working on this language and then I realized that they would need to be approved by the people working in these areas. Consequently, I presented the rough draft of the protocol to the Clayton County Child Exploitation Prevention & Response Multi-Disciplinary Team today and they are going to take their sections to their respective units and send me their comments in May. We are hoping to have a finalized protocol soon after our next meeting and be the first county in the state of Georgia to have a county level CSEC protocol. The process taught me that there was some policy learning and innovation throughout the process as we can see in the policy adoption literature. However, in the end none of the state level protocols met the needs of the multi-disciplinary team and as a result most of the protocol will include completely new procedures on how to work with CSEC cases on the county level. I am looking forward to finishing the final version of the protocol so we can start implementing in throughout Clayton County!
Posted by Laura at 9:04 PM 3 comments:

Mapping out my book manuscript..... 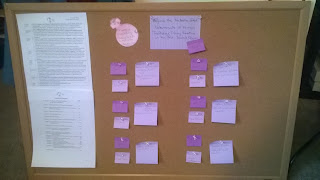 No, this is not a police department's criminal investigation board, this is the outline for the book I am writing based on my dissertation. I am a visual person and mapping out the different chapters to my book along with the main revisions necessary has helped me wade through the lengthy and overwhelming process. When writing the book seems daunting, I look at the board and break things down into more manageable parts. It helps me see how much I have done and where I am going with the revisions. I know they make computer programs that do that now but I am old school and I enjoy looking this when I need to rework a chapter or change the design of a chapter. I also posted my work plan for the next few months and my table of contents to help me visualize the process. I just started writing the only brand new chapter on policy implementation this week and it is slow going but I know every step is closer to my goal of a finished and published book. The writing and revision process will likely dominate my life this summer while I am in DC as a visiting scholar at the Kennan Institute. Revising is not as glamorous as gathering the data in the field but it is an important part of the scholarly process so I wanted to make sure I documented it in a blog post!

I finally buckled under the pressure to join Twitter! I am taking a class at Clayton State on innovative methods for online teaching and I attended a workshop yesterday on social media in the classroom. During the workshop they presented a number of different methods for communicating with students on social media to stimulate learning outside of the classroom. This combined with the fact that Ambassador Coppedge from the Office to Monitor and Combat Trafficking in Persons at the U.S. Department of State tweeted a thank you to me for moderating a panel a few weeks ago which I wrote about in a previous blog post compelled me to join. At first I was skeptical about Twitter's ability to engage student learning but I will try it out with my online class this summer and see how it goes! Wish me luck! 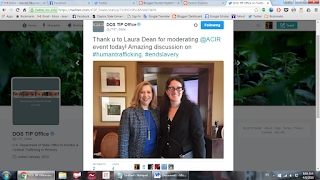