This was the first picture I took in Kazan and I have been meaning to post about it after I did some research on it. We were walking down the street our first day here and my friend Aric from KU (University of Kansas) who is also on the CLS program pointed it out to me. Since we have had four years of Russian class together he is familiar with my research and we thought it was an interesting sign. The sign says "Don't Pay for Sex"and I initially thought it was an NGO campaign against prostitution and/or human trafficking. However, upon closer inspection and a visit to the website, I found out it is a pornography website where people can go instead of paying for sex from a prostitute. So what I thought was an interesting campaign from NGOs to deter the purchasing of people turned out to be the exact opposite and commodifies them on the internet instead! Just an interesting observation of what happens with feminist rose colored glasses and a willingness to do the research! 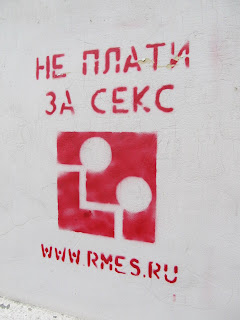