We had our first day long excursion today to Yelabuga which is a town on the other side of the Republic of Tatarstan. We spent three hours on the bus going there and another three hours coming back so it was a long day! Plus the roads were mostly one lane so there was a lot of passing and jerking back and forth because the bus was an automatic! We arrived and had a welcome party complete with folk costumes and traditional singing and dancing! 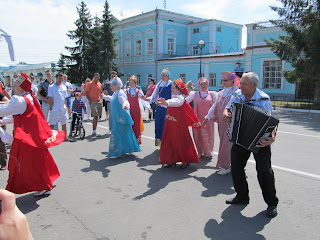 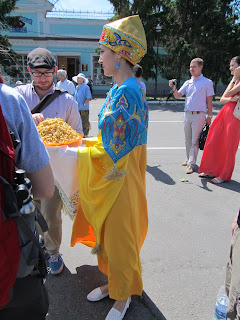 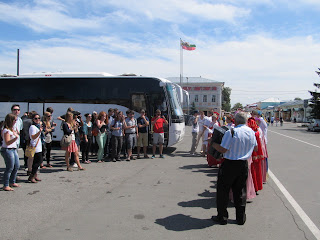 They also had samples of Chak-Chak, a traditional Tatar dessert which is like Rice Crispies dipped in honey. This is a photo of the bus and all of us enjoying the music! After the music and dancing we enjoyed a traditional Tatar meal which first consisted of a toast with horseradish vodka. They call it "The Fly" which is part of the traditional hospitality in this region and is a small glass of liquor which they bring to costumers before they order. The glass is pictured below. After that we were entertained with local folk songs by a man playing the smallest accordion I have ever seen! For lunch we were served a potato and meat dish in a fun looking pot! 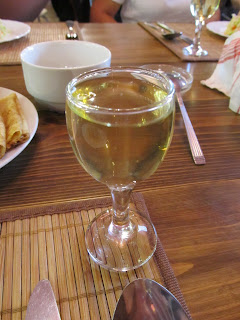 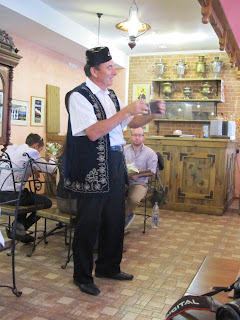 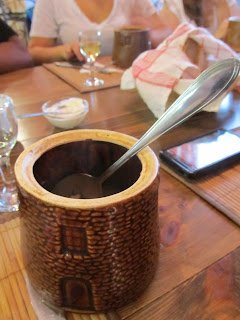 Yelabuga is a traditional country town in Tatarstan with churches and mosques. This is a picture of one of the side streets. 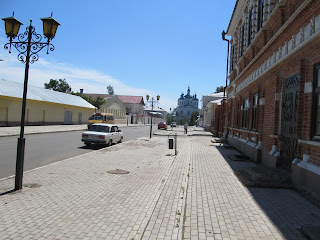 We climbed to the top of that church to get a view of the town. Since it was an Orthodox church women have to cover their heads....which is why I am wearing that scarf and look like a babyshka! 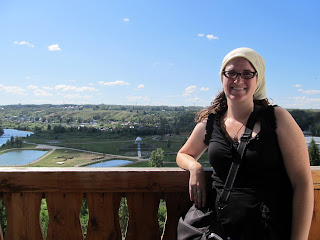 Russians have a wedding tradition of locking locks with their names and wedding date on them to bridges and throwing away the key. Here is one of the bridges in that town. 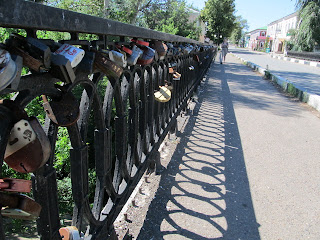 Here is a picture of me and some of the students in my language group (taken by Andrew) at the end of the bridge. 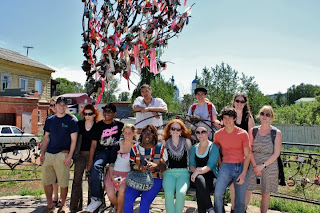 In our literature class we have been learning about the Poet Marina Tsvetaeva who lived in this town after she was ostracized by the Soviet regime. She committed suicide in this house and now they have a memorial museum dedicated to her. 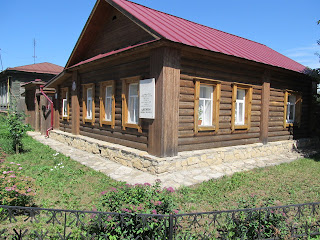 This is her final home as our instructor put it. 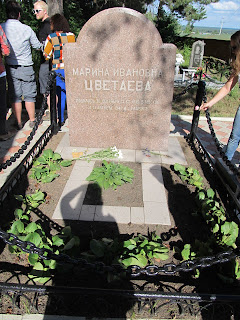 This is Devil's Tower, a tower that stands where the old castle was located and hosts a spectacular view of where the Volga (like the Mississippi of Russia because it cuts through the middle of the country) and Kama rivers join. 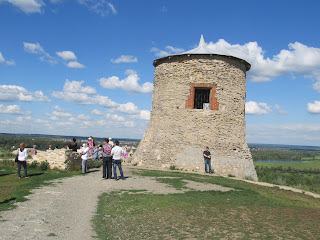 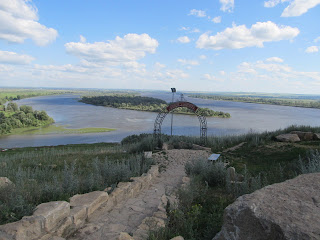