We had our first excursion today to the Kremlin in Kazan which is a UNESCO World Heritage site. The earlier post about Kazan shows a picture of the entire Kremlin from across the river. I haven't made it over there yet but these are the up close and personal photos of the most interesting buildings in the Kremlin (some of the buildings are just offices). 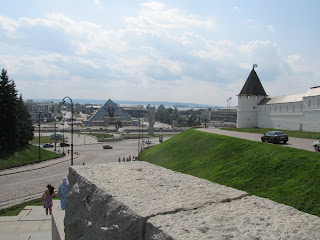 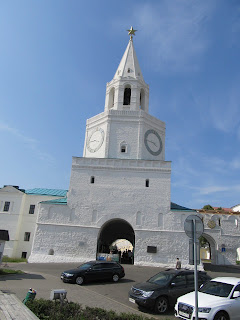 This is the gate to the Kremlin (it is a walled complex) and a view from the Kremlin of the city. 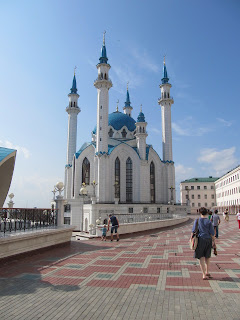 This is the Kul Sharif Mosque. We were able to go inside but we couldn't take any pictures. Women had to cover their heads and if your shorts or dress didn't go down to your knee you also had to have a covering for your knees as well. Men who had shorts above the knee also had to cover them! It was the first Mosque I have ever been in and was very beautiful, because they don't have pews there were beautiful rugs on the floor for the men to pray on. Sometimes there is an extra room fro the women to pray in but there was no such room at this mosque which made me kind of sad! 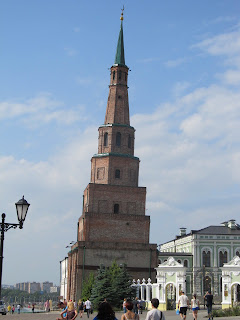 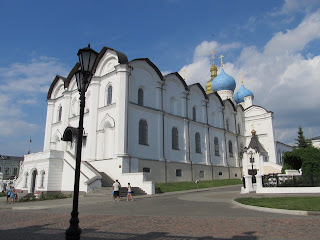 Above is the Annunciation Cathedral which is an Orthodox church about 100 meters away from the Mosque. It is really interesting how the two religions and cultures have existed together in this city since Ivan the Terrible conquered the Kazan Khanate in 1552. The leaning tower to the right is the Syuyumbike Tower which was built by Ivan the Terrible for the niece of the deposed Khan whom he wanted to marry. Legend has it that she agreed to marry him (he was pretty crazy hence the name) if he built her the highest tower that he had ever seen. When it was finished she threw herself off the tower and fell to her death. The tower leans as you can see from the picture so clearly he didn't put that much thought into the construction but yet it is still standing today!