We also went to a hockey game last weekend which was also on my bucket list of things we have to do in Kharkiv! The team here is the Kharkiv Dynamo (which means dynamic) and the season was gearing down so I knew we had to make the most of it and make it out to a game soon. The arena was kind of in the middle of no where and we had to take the metro to a marshrutka (little bus)....riding marshrutkas  is always interesting here because they jam them full (max capacity was 43 people) and I never know where I am going. It's not because I have a bad sense of direction it's because they go so fast and they are crammed full of people so it is difficult to figure out where you are especially when we are in the Soviet apartment blocks and everything looks the same. Luckily, we relied on the kindness of strangers who told us where to get off and then directed us to the arena. We opted for a tram on the way back and again a really nice guy helped us get back to the metro and even made sure we knew which stop we had to get off at!

We got to the game a little late and the arena was packed so we ended up sitting in the front row. We realized after sitting down why the seats were free...because of the huge bar blocking your view. Still the entrance to the game was free so we didn't complain! 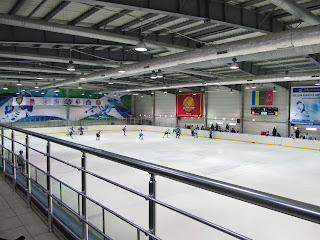 This is the symbol for the Kharkiv Dynamo team. 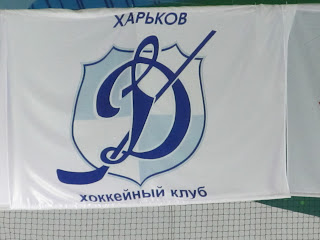 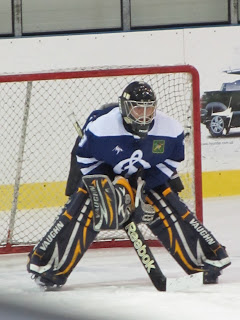 It was standing room only for most of the game...either that or these people just wanted to be close to the bar! 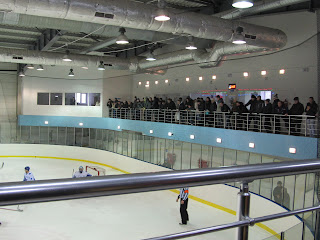 The flag of Ukraine, the Flag of Kharkiv oblast (region) and then the Kharkiv City flag. 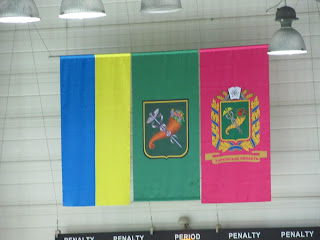 The final score. The game was actually really close and it was 1-1 until the last ten minutes or so. 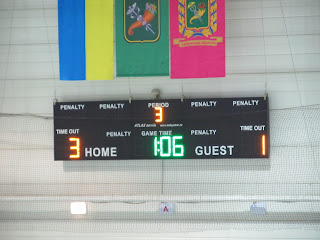