Yesterday we went to Barabashova Market, which rivals a market in Odessa for the title of the largest market in Europe! The market stretches over 7 km and was very chaotic and overwhelming at first. We were there for an hour and we never even left the clothing section!  We wanted to go to the market because my guide book said that there was restaurant in the center of the market that served real Vietnamese food. So we headed looking for a change from the normal meat and potatoes we have become accustomed to in Ukraine. Th metro stop was Academic Barabashova which I thought had something to do with the university dorms that are located near by. However, my Russian teacher told us that Barabashova was a astronomer and professor at Karazin Kharkiv National University. I am not sure how he would feel about this market being named after him as well or the diverse sellers from Southeast Asia or Africa but for me it was fun to speak to other foreigners in Russian. We all seem to give each other a break while speaking this difficult language and it's fun to hear the variety of accents! Here is a picture of the entrance to the market. 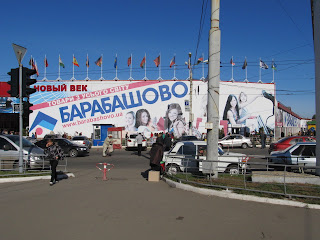 We wandered down a bunch of these aisles looking for a red sign for the restaurant. 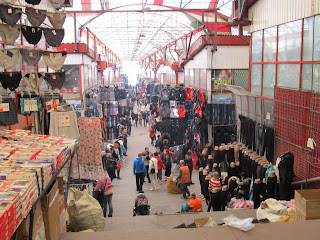 Eventually we found it and enjoyed a wonderful meal! I had pho (noodles in broth) which I used to eat in Seattle and Matt had a rice and chicken dish. There was a ton of food and it only cost us around $10 so we will definitely be going back! 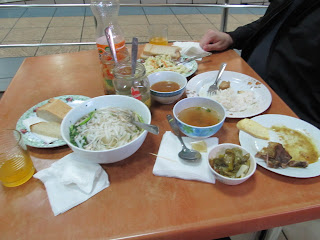