A few months ago I was asked to moderate a panel titled "Human Trafficking: Lifting the Veil on Modern-Day Slavery" for the Atlanta Council on International Relations that included Susan Coppedge the Ambassador-at-Large, Office to Monitor and Combat Trafficking in Persons, U.S. Department of State and Camila Wright the Human Trafficking Prosecutor, Georgia Office of the Attorney General. The panel took place today and the whole event was such a great opportunity that I kept pinching myself because I did not really believe it was real. 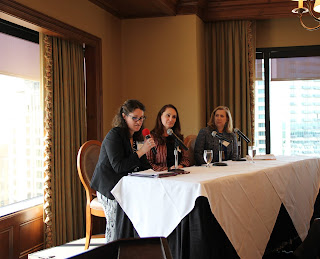 Here I am giving some introductory remarks on human trafficking and the scope of the crime around the world and in Georgia. Then I followed that up with some overarching themes from both speakers and finally a call to action to the participants and the Georgia Cares 24 hour hotline 1-844-8GA-DMST. I was able to meet so many different people and see a number of familiar faces from the Georgia Statewide Human Trafficking Task Force.