We left for Ukraine on September 12th and flew through Chicago and Munich arriving in Kyiv on September 13th. Despite the Lufthansa crew member labor strikes in previous weeks the planes flew as scheduled and everything went smoothly during our travels. This could have to do with the fact that half of our plane to Kyiv were Hasidic Jews on a pilgrimage to small town in Ukraine for the Jewish New Year, Rosh Hashanah. They prayed before we took off and clapped when we landed safely in true East European fashion (even though they were from New York).

We spent the night in Kyiv because I decided I did not want to scar my husband by making him take an over night train to Kharkiv with all of our stuff on his first day moving to a foreign country! Instead we got up the next morning and took the 6 am train which was actually a good idea since we were up anyway due to our jet lag. Getting all of our stuff, well I should say my stuff since my husband only brought one large suitcase and I had two, onto the train was a bit of a hassle and people were staring at us lifting huge suitcases above their heads. Since it was a high speed train, it only took 4.5 hours to get to Kharkiv so there was not a ton of storage space for luggage. We arrived safely in Kharkiv on the 14th after traveling on lots of different modes of transportation and are looking forward to settling in and exploring our new city!

This is a photo of our luggage before my parents drove us to the airport....so you can see I am really not kidding about the huge suitcases part! 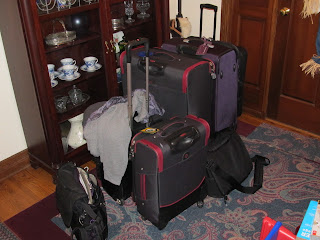