Last night we went to the Kharkov Assembly, a festival of classical music sponsored by the Rotary Clubs in Kharkiv. Since Rotary sponsored it we were able to get in for free and had seats in the third row! I thought it was going to be a bunch of classical music which is why I brought my husband who doesn't speak Russian along. However, like all things in Eastern Europe my expectations and what actually happened were wildly different! The first hour consisted of giving out awards to professors and instructors and thanking the Dean of the musical academy in Kharkiv. Then they finally got down to the music after a hour or so of that and different bands and groups played all sorts of music Ukrainian, Russian, classical, jazz, and even some Wagner. This went on for two and half hours with no break until I was finally ready to leave. Still it was a wonderful night of music made possible by Rotary and I even got to see a balalaika a Russian folk instrument played!

This is a photo of the Kharkiv State Academic Opera and Ballet Theatre named after M.Lysenko, a Ukrainian composer. The exterior and interior were very Soviet! 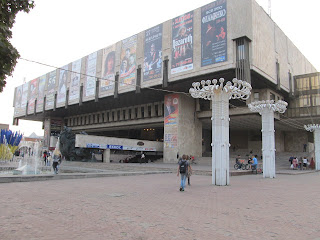 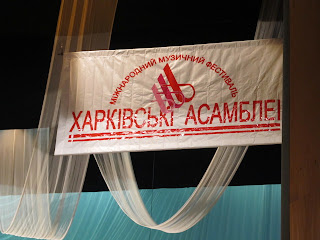 The welcome to the 95th annual Kharkov Assembly. 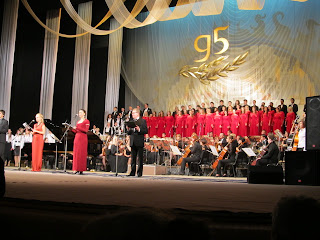 The President of the Rotary Mriya Club presenting the Dean of the Musical Academy with a plaque. 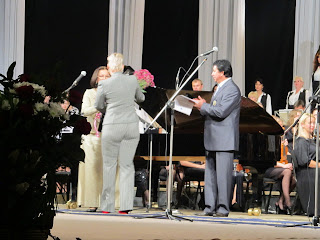 This was a group of folk instruments including different kinds of balalaikas and it was my favorite group of the evening. 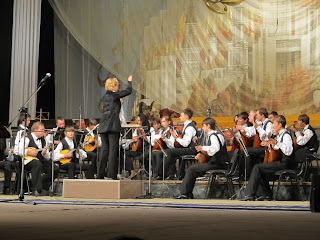 The Mirror Stream at night, a monument built in honor of the WWII victory and it is one of the seven wonders of Kharkiv. 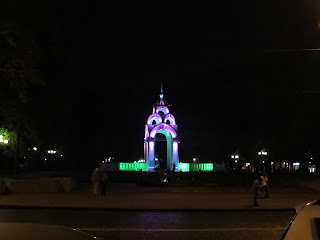