Commercial Sexual Exploitation of Children (CSEC) Lobby Day was February 11, 2016. This is the day that anti-trafficking organizations from around the state go down to the capitol in Atlanta and lobby for different human trafficking initiatives. This year the focus was on Safe Harbor Legislation which would grant protections for trafficking victims and so that they will be treated as victims and not prosecuted as criminals. 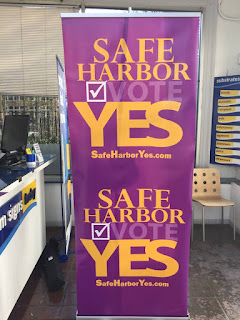 We have also started preparing for the Constitutional Amendment for the State of Georgia called the Safe Harbor Fund Amendment which will create a fund to help human trafficking victims by charging adult entertainment industries and seizing assets from those convicted of trafficking. This is a great editorial by Evia Golde, the Chair of United Way of Greater Atlanta’s Women’s Leadership Council on Human Trafficking Task Force and Co-Chair of the SafeHarborYES Ballot Committee about the implications and importance of this amendment for Georgia and I encourage everyone to vote for it!


The text of the constitutional amendment will read as follows: