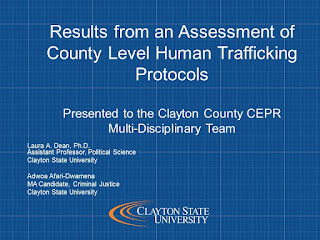 Here are a few of the findings from my research. The main components of the protocols included a mission statement, scope of the problem, different types of responsibilities allocated to law enforcement, victims service providers, criminal justice authorities, and education and community initiatives. All of the protocols/policies were adopted in the past two years. Some of the bigger counties around the United States such as Kind county in Seattle rely on state level protocols. All of the protocols promote a collaborative approach with multiple stakeholders from different agencies and these stakeholders have clearly defined roles in the protocol. New Jersey outlines the county level task forces/coalitions protocols "are very helpful, we have also learned from experience as well as from our counterparts in other parts of the country that building personal relationships and trust among those professionals working to combat and respond to trafficking is the most critical step. From that, protocols may emerge but it is the ability to be flexible and to respond to the unique circumstances of every case that brings value to the process."

This cursory research will help the team develop the first county level human trafficking protocol in Georgia. We are set to discuss and examine a rough draft of the protocol that I am working on with my graduate student in April.