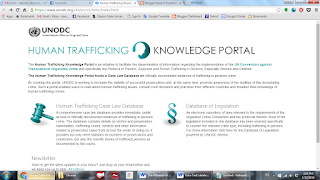 I like to keep tabs on new human trafficking resources to see if they would be useful in the future for my research purposes. I have known about the University Michigan's Human Trafficking Law Project (HTLP) database since it was established in 2011. I have not used the database since I don't track legal proceedings or sentencing data for traffickers in the United States at this point in my research. This past week I learned about a new database sponsored by the United Nations Office on Drugs and Crime called the Human Trafficking Knowledge Portal. According the website, it is is an "initiative to facilitate the dissemination of information regarding the implementation of the Palermo Protocol." Examining the implementation of the protocol and how states choose to conform with the protocol is precisely the topic of my current research. So I was really excited to learn about this new portal which includes a case law database for international case law on human trafficking and a database for legislation. The database is called SHERLOC (Sharing Electronic Resources and Law On Crime). According to the website, most of the "legislation included in this database has been enacted specifically to counter trafficking in persons." Looking over the different laws, the database focuses on the criminalization statutes and some national laws but not any other types of laws or policies related to victims services. Despite the incomprehensiveness of the database, I think it is a good start and includes laws and policies from 95 different countries. Hopefully more laws and policies will be added in the future and then it will be a useful and informational database.
Posted by Laura at 5:46 PM